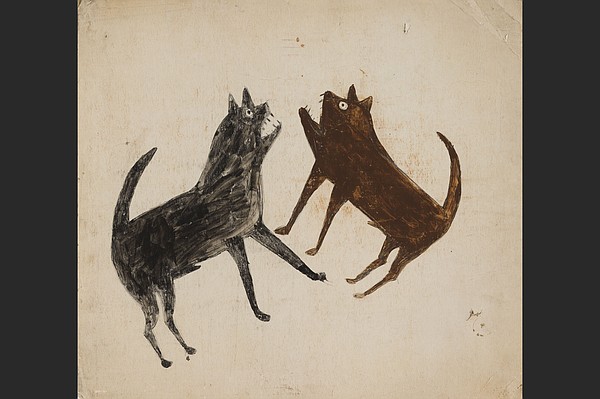 In the mid-1970s, punk rock entered the underground and showed that you don’t have to be particularly good at your instrument to make music. The early punk bands from America and England released short, simple songs with passion and naivety, fury and humor. If they were out of tune, so what? If the singer’s voice was weird, who cares? All that mattered was that they did it on their own terms, to hell with virtuosity.

Which isn’t to say that none of these early punks or their descendants were gifted or determined. Many were both, and the music they made transcended the basements, bars, and squats where it came from.

It may be too simplistic, but punk rock has a lot in common with the stunning works on display in “A Visionary Vernacular Road Trip”, the current exhibition at the Brad Cushman Gallery at the University of Arkansas at Windgate Little Rock Center for Art + Design. .

The artists featured represent voices that have not always been recognized in the establishment of the art world; they are proof that if the will is strong enough, art can come from any corner, not just the academy, and some will be amazingly good.

Cushman, the gallery director and school curator, has assembled a powerful collection of works for an exhibition that winds through alleys and less traveled paths.

Howard Finster, James “Son” Thomas, Bill Traylor, Jane “in vain” Winkelman, Clark County Russell Butler (aka buZ blurr), and Minnie Evans are among over 40 folk, self-taught, and underdog artists from over 20 states. represented in the exhibition, which remains visible until October 24. A reception is held at the center from 5 p.m. to 7 p.m. on October 15. Masks are mandatory. 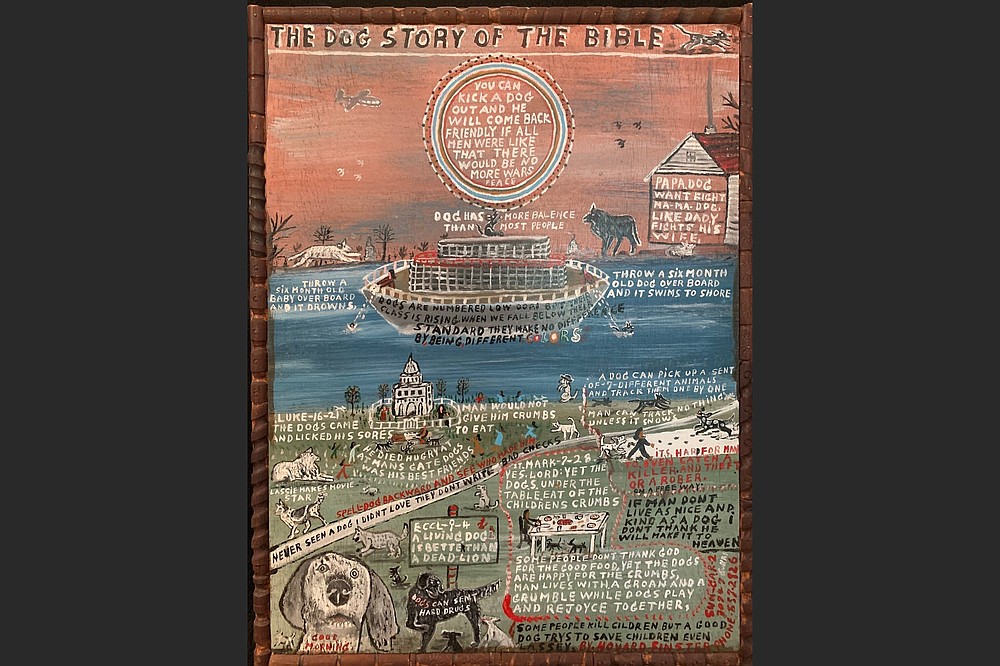 One of the highlights of the show is the breadth of media used to create these images and objects. Broken glass, scrap paper, leather, tin, house paint, bones, teeth and more appear in the works as proof that art can come from anything the person who creates it at your fingertips.

“It was enough for me to bring it into the gallery for the students to see that if you just let go and explore materials, look at what you can find,” Cushman explains. “The reactions I have seen have been that people are really drawn to the mix of media and the lyrical nature of the pictures.”

The works range from the 19th century to the present day and include Samuel G. French’s intricately carved walnut and cherry bed from the mid-1800s; Clementine Hunter’s playful oil paintings depicting her memories of the African home on the Melrose Plantation in Louisiana; the glass and mixed media pieces by Paul Darmafall, aka The Baltimore Glassman; and the carved stoneware with multiple faces of musician Lonnie Holley. 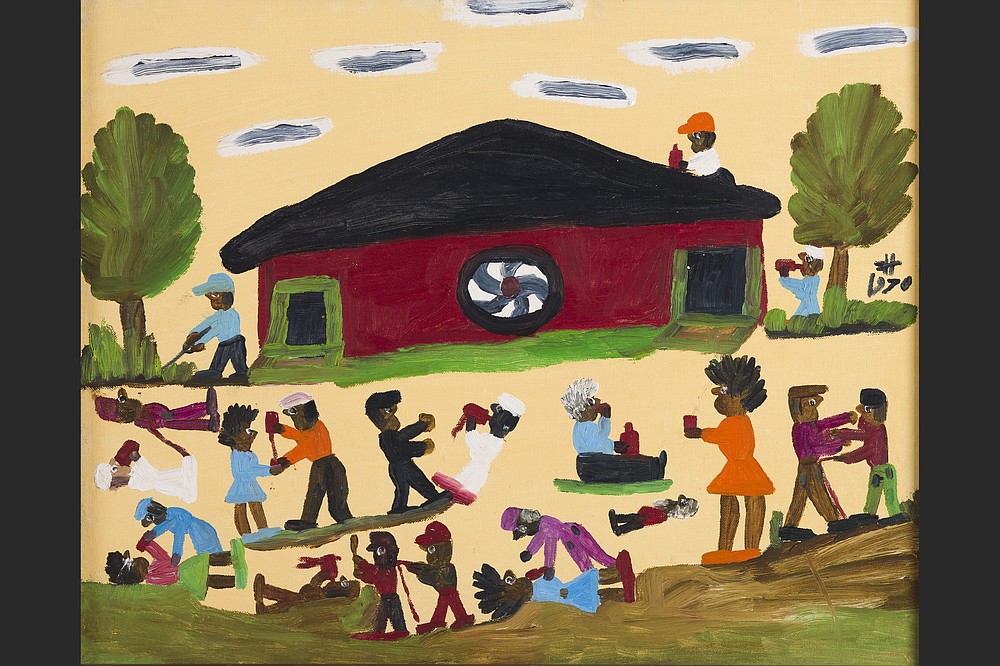 Seeing Bill Traylor’s painting “Fighting Dogs” is a particularly moving experience. Traylor was born a slave in the early 1850s in Alabama. He was 80 years old and living on the streets of Montgomery when he began to paint spare and vibrant figures, mostly on discarded cardboard and other pieces that told of memories and observations from his life.

“Fighting Dogs” shows two dogs, one black, one brown, clashing. They are painted in poster paint and appear in profile, flat on the support, which is actually the back of an old sign (the exhibition catalog includes a photo of the reverse, an advertisement for a furniture store ). Despite its minimalism, the painting is bristling with emotion and energy.

Christianity is a recurring theme. Edgar Olson’s “In the Cool of the Evening” is a woodcarving showing Adam and Eve, fig leaves in place, behind a stand of apple trees as God points to the black serpent at their feet. “The Baptism in Front of Buildings with Christ” is a painting by Eddie Lee Kendrick, born in Ouachita County in 1928, and shows Jesus with his arms outstretched as a baptism takes place. 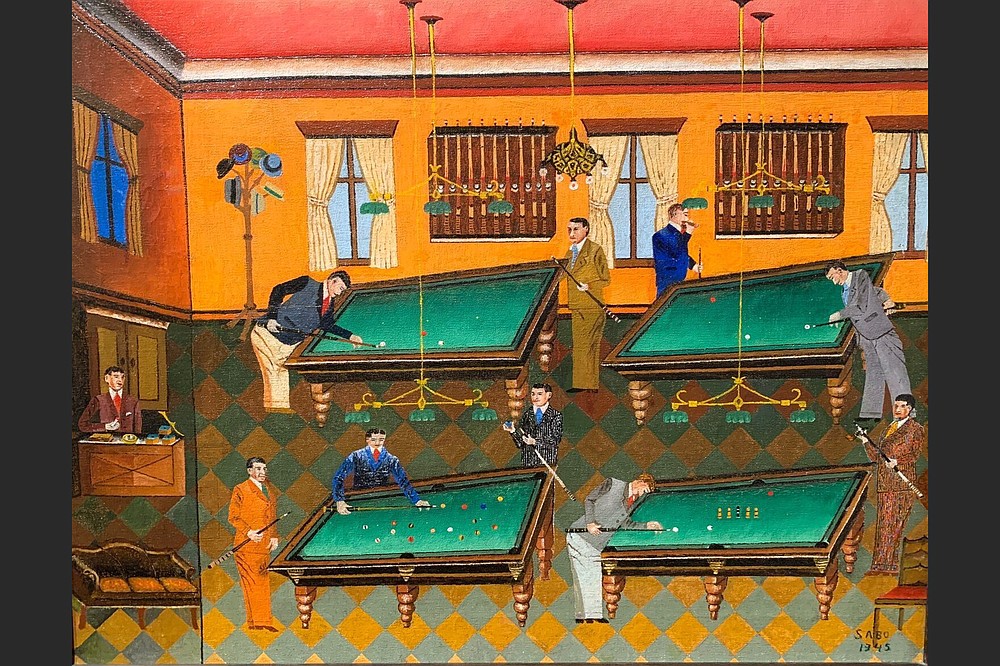 Howard Finster, the Georgian preacher whose paintings appeared on the covers of REM and Talking Heads albums, is portrayed in a typically text-laden and cleverly crafted painting from 1976 titled “The Dog’s Story of the Bible.”

And there are some whimsical, sometimes surreal works, like Russell Butler’s “Tank Head”, a mixed media sculpture that uses cardboard, wire, boots, a propane tank, the jaws of an animal and other objects found to represent a man seated on a chair. ; and MC Escher’s futuristic “two-panel car”, finely drawn in colored pencil by William A. Hall, who spent years homeless in California.

Cushman is a longtime collector of self-taught and foreign artists. Several of the pieces in this exhibition, including the wonderful “Bottle Cap Snake” by Leroy Archuleta, made from hundreds of bottle caps, and the colorful root and mixed-media sculpture “Whore of Babylon” by Bessie Harvey are from the collection he shares with her husband, Policeman. 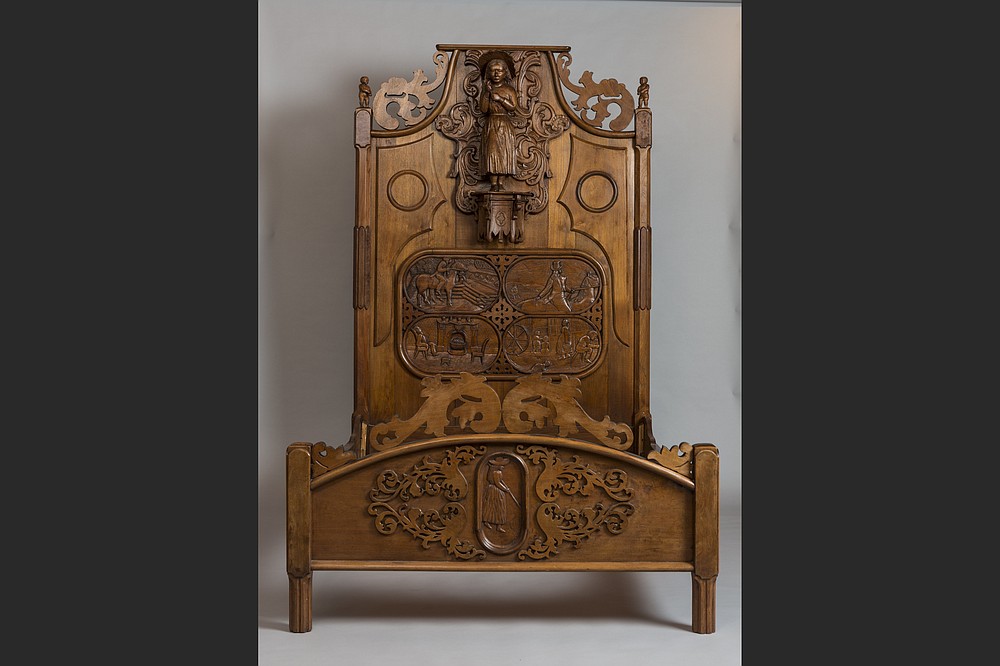 He returned to the catalogs of two crucial exhibitions, “Black Folk Art in America” ​​of 1982 and “Baked in the Sun: Visionary Images from the South” of 1987, to take inspiration from “A Visionary Vernacular Road Trip” and contacted its network of galleries, collectors and institutions for suggestions and works. The response was such that he decided that an exhibition could not contain its magnitude. 2.