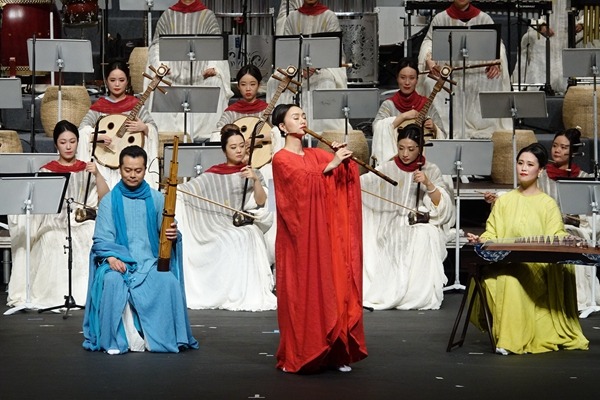 The Shanghai Chinese Orchestra kicked off its new musical season on May 15 with the premiere of its Beautiful china concert. The opening concert at the Shanghai Grand Theater marked the first time that more than 10 ethnic instruments have been played in one piece of music.

In a review for the Shanghai newspaper The Paper, reporter Liao Yang wrote that the concert hall lit up and “turned into a rock music performance” when all the instruments were played together in the third. chapter.

Wang Yunfei, the composer of Beautiful china, says the team has a wealth of experience in creating new compositions using ethnic musical instruments.

“But this is the first time that many of them have appeared in one piece,” Wang says.

“Each has its own unique beauty and features a distinctive texture and sound quality,” Wang told media before the premiere.

“My mission was to string them together with a narrative thread and create a journey, or a story, about the unity and solidarity between the different ethnic groups in China.”

Luo Xiaoci, director of the orchestra, says the concert consists of five chapters, following the main thread of Chinese civilization through 5,000 years.

“We have introduced the new composition of Beautiful china this year to celebrate the centenary of the founding of the Chinese Communist Party, hoping to present the beauty and glory of Chinese culture from a new perspective, ”Luo ​​said.

The first was performed under the direction of Tang Muhai, a renowned musician who was the conductor of the Finnish National Opera, the Belgrade Philharmonic and the Zurich Chamber Orchestra.

Having spent decades conducting Western classical music, Tang says now is the time for Western musicians to take an active role in the development of Chinese music.

“For centuries we have learned from the West and admired their culture,” says the 71-year-old maestro.

“Chinese instruments and folk music have made breakthroughs and achievements, presenting the essence of our culture. I think it is time for Western musicians to be invited to join in the creation and performance of the Chinese music because our music is not inferior, but in parallel with the West. “

Founded in 1952, the Shanghai Chinese Orchestra is the first large-scale orchestra in the country to present Chinese folk music instrumentation. Tang says that Chinese musical instruments were brought together to form the orchestra in the 1950s and 1960s, learning from the structure of Western classical orchestras.

“Chinese folk music is going through a period of revolutionary development, and I don’t want to fall behind,” Tang says.

“I hope more musicians can join us and ride the wave, so that we can research, create and develop new talent together.”

Tang will join renowned musicians Zhang Guoyong and Tan Dun as the conductor of the SHCO in a series of concerts for his new musical season.

The SHCO has held annual musical seasons since 2005. Over the years, Luo says they continue to improve the programs and have introduced many themed concerts and new compositions that are now part of the orchestra’s repertoire.

A major highlight of the 2021-22 season is the premiere of a new edition of Tan’s Chinese instruments Buddha Passion, a composition inspired by ancient wall art from the Mogao Caves of Dunhuang in Gansu Province.

The concert will be given by SHCO at the Shanghai Grand Theater on New Year’s Eve. This will be the third year that the theater has hosted a New Year’s concert on the theme of Chinese folk music.

Maestro Tan will conduct the concert himself.

He composed Buddha Passion after repeatedly visiting the Dunhuang murals and working on the piece for six years.

To adapt the piece to Chinese instruments, Tan did more study of the musical scenes in the murals. He also made revisions to the piece based on the unique sound quality of folk instruments, as well as the performance styles of individual SHCO artists.