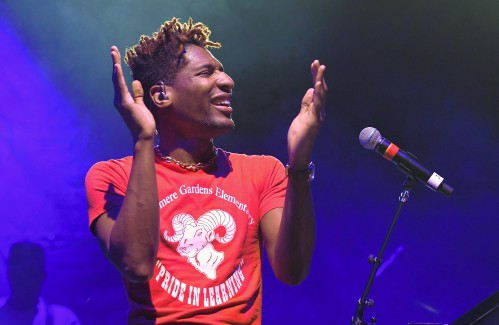 While it literally started with a bang and a lot of rain, Green River Festival 2021 was a great time for all and full of so much amazing music.

People danced to bands like Cimafunk from Cuba and Underground System from Brooklyn on the main stage and the Dean Beans stage, while quieter folk musicians like Charlie Parr dominated the Artifact Cider stage. I noticed a woman walking through the crowd with “I needed this” written in black magic marker along her arm. It was a sentiment shared by many that basically summed up the Green River Festival 2021.

This year the festival has been moved to the last weekend of August instead of mid-July and this schedule change was one of the many firsts that marked this year’s festival.

But the biggest first was that it was the first time the festival had been held at the Franklin County Fairgrounds instead of their longtime home on the lawn of Greenfield Community College. It was a move that came out of necessity because GCC wasn’t available, but it turned out to be the one that worked the best. The fairground provided a lot more space and was simply easier for spectators to move around and sit comfortably on the lawn. There were more places to sit, including the grandstand and picnic tables that were scattered around, including near the Dean’s Beans stage.

And that setting was so much more accessible. Having attended the 2013 festival while recovering from a broken knee, I can tell you that the hill between the GCC stages can look like Mount Everest if you have mobility issues. This year, I noticed that people using canes, walkers and even wheelchairs were moving around in the crowd.

there was so much music to soak up, and as usual, great discoveries were made.

Ghost of Paul Revere’s strong harmonies and fierce acoustic sound made it a new favorite, as did Ranky Tanky’s gospel-influenced roots music. The Grammy-winning South Carolina band wowed the crowd with their high-energy sound.

And a special thank you to the artists from New Orleans – The Rebirth Brass Band, Ani DiFranco and the show stop Jon Batiste. These artists were true professionals who gave their all in their performances while their homes, friends and family suffered the wrath of Hurricane Ida.

Overall, thanks to Jim Olsen and Signature Sounds for another fantastic Green River festival. It was great to see you again and join in the chorus. I needed this.

There have been some changes to the schedule which is posted on the fairground website. The Greenfield-based Love Crumbs, which were due to kick off the musical portion of the fair with a show on Thursday at 4 p.m., had to cancel. The kids at Matt Kim’s Rock Shop, whose appearances at the fair have become an annual tradition, have also had to cancel. Matt Kim will also not be appearing with his group Ulta Mammoth. Instead, on Thursday night, music from Tracy and the Valley Revival directed by Tracy Odle will be presented. The band have an excellent repertoire from which they will perform some of your favorite rock and southern rock tracks.

Tracy and the Valley Revival will be back on Friday September 9 at 2 p.m. then at 4 p.m. it will be Opal Canyon, the folk-rock group led by singer Debra DeMuth and guitarist Dave Houghton. The band is a Valley supergroup that also includes Ray Mason on bass, Jason Smith on drums, as well as multi-instrumentalist Bob Hennessy. Their recent scheduled appearance at Heath Fair was canceled due to Tropical Storm Henri and the band are currently working on a new album, following up on 2019’s “Beauty and Loss”. On Friday night, music from Alana & DUH Band will play popular tunes from the 60s to the 90s at 7 p.m.

The music starts early on weekends with music from the Decades band starting Saturday at 11 a.m. They’ll play all the hits from the 50s and 60s. Then it’s country rock rock music from Bill Knittle and the Flying Sparks at 2pm, followed by the 60s experience and their faithful renditions of songs from 1960 to 1969 to 4 p.m. The music will end on Saturday with the classic rock sounds of Chicken Wire at 7 p.m.

Sunday will kick off with the Americana Sounds of Opel (not to be confused with Opal Canyon) at 11 a.m. and will be followed by the popular bluegrass band Seven Mile Line at 1 p.m. Scott Kuzmeskus and his friends will bring their own brand of soft rock and folk music to the stage at 4 p.m. Musical weekend ends at 6 p.m. with the ever-enjoyable classical and honky tonk country music of Rosie Porter and the Neon Moons. .

Music is free with fair entry. Advance tickets are on sale now and available on FCAS.com.

Sheryl Hunter is a music writer who lives in Easthampton. His work has been published in various regional and national magazines. You can contact her at [email protected]