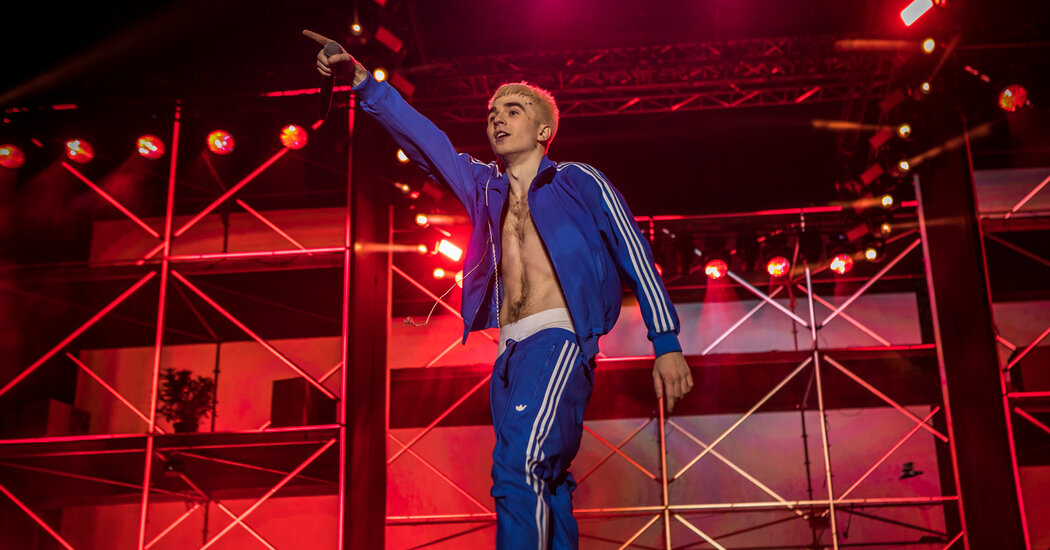 WARSAW – The expansive grounds of Warsaw’s Bemowo Airport have hosted concerts by some of the world’s biggest stars. Michael Jackson played there. Madonna too. Metallica too.

But last Saturday, more than 30,000 people – many young teens, with their parents acting as chaperones – gathered next to the track while waiting for a new star to take the stage: Michal Matczak, a 21-year-old rapper. with bleached blonde hair and a constant smile, better known as Mata.

“He is like the representative of our generation,” said Joseph Altass, 20, a student who had traveled from Gdynia, more than 200 miles north of Warsaw, for the concert.

Zuzia Waskiewicz, 19, sharing a bottle of flavored vodka with a friend, agrees: “He’s the first person to talk about real things about us.”

When Mata appeared at 8 p.m., it was clear that he was addressing the younger generation of the audience: one of the first tracks of the evening, “Blok,” was about leaving his parents’ house and boring. his new neighbors while partying. Mata then performed an ode to marijuana, followed by a tune about drinking alcohol on the concrete steps that line the Vistula River in Warsaw. The crowd was knocking at every word.

Mata’s impact in Poland was inescapable. Earlier this year, one of his tracks, “Kiss Cam”, aired so frequently that it appeared on one of Billboard’s global charts – a first for a Polish band. When last Friday he released “Mlody Matczak” (“Young Matczak”), his second album focused on his young adulthood, he immediately topped the country’s Spotify charts. Several of his songs have over 50 million views on YouTube.

But one specific track marked Mata’s explosive entry into Polish cultural life two years ago: “Patointeligencja” (an amalgamation of Polish words for pathology and intelligentsia). On the spare production, Mata paints a picture of student life at Batory, an elite high school in Warsaw where many students are expected to lobby for admission to the world’s top universities. In his account, few students quietly study for their final exams. Instead, they use drugs, alcohol, and sex to cope with the pressure. “My friend wanted to spend his father’s entire salary on drugs,” Mata recalls, “but his old man was making so much he would have killed himself trying.”

“Patointeligencja” caused a sensation almost as soon as it was released on YouTube in December 2019. Cyryl Rozwadowski, editor-in-chief of New Once, a popular Polish culture website, said that “it was such a revolutionary event, I didn’t Hardly think of it as a song anymore.

Newspapers and TV shows began to use the track to debate both pressures on Polish youth and questions of privilege, as if a seemingly wealthy kid like Mata should rap at all. Their catches often reflected political divisions in the country. Poland has been in a culture war for years, with liberals on one side and the populist ruling Law and Justice party and its conservative supporters on the other, clashing over issues such as gay rights, abortion and even the rule of law.

Some conservative sections of the media, including the country’s main government television station, presented Mata’s track as showing the dysfunctions of the liberal elite. They have regularly pointed out that Mata’s father is Marcin Matczak, a lawyer and scholar known for his staunch opposition to ruling party policies.

On his new album, Mata pays him a tribute called “Papuga” or “Parrot”, slang for lawyers in Poland. His father welcomed the association by publishing a book this year entitled “How to raise a rapper”.

Hours before the concert at the airport, Mata said in an interview at his record label’s lavish office that he likes to scandalize. “I’m a bit adrenaline junkie,” he said, adding that as an only child he craved attention. Sometimes he feels “more like an internet troll than a rapper,” he said.

But he insisted that he didn’t write “Patointeligencja” when he was 18 to create a sensation. He typed it on his phone during his last year at Batory when he had just “had a big blackout”. A three-year relationship had ended, he said, and he was overwhelmed with the stress of exams and his teachers saying he was heading for failure.

One day he skipped class and went to a Caffe Nero, where he poured alcohol in a cafe while searching for a beat on YouTube. When he found the music for “Patointeligencja”, the lyrics poured out angrily on him. “It was just a stream of consciousness, all these bad emotions coming out of me,” he said. “Even now I’m excited when I think about this moment. I felt alive.

When his father came to pick him up later, Mata rapped the song for him. He said the song was like “the cure” for his depression. Soon he was writing his debut album, “100 Dni Do Matury” (“100 Days to Finals”), which critics later called a farewell to his childhood. He managed to graduate.

“Mlody Matczak” – released last Friday – is mostly about his new adult life, he said, but it also includes a song cursing Polish politicians who had criticized him and his father. There is a song about his grandfathers, who both passed away this year, one of the complications of Covid-19. At one of their funerals, Mata stood up to sing and the pianist asked for his autograph, he said.

Critics in Poland speak of his new album as more than a scandal. Bart Strowski, co-author of a Polish rap book series, said he liked Mata’s duality. On the one hand, he “is an angry young rapper filled with booze and weed.” On the other hand, Strowski said, he is “a touching and sensitive child” who writes unusual songs filled with “incredible sociological detail.”

Mata said he was famous in Poland, but also hopes to find success outside the country. He had wondered if he should try rapping in English, he said, but if he did, he would keep a “strong Polish accent” to stand out.

At Saturday’s concert, Mata’s ambition was clear, with the show staged with the help of a director. During one song, he was joined by about twenty dancers in Polish folk costumes and red hoods. For another on submissive sex, he stood in the middle of a huge block of lights as a group of dancers took off his top and sprayed him with cream.

After almost two hours it looked like there was little show left, and the only move left to play was “Patointeligencja”. But instead of performing the song, Mata left the stage, jumped into a blue helicopter, and flew away. The crowd waited for 10 minutes, asking him if he was really gone, but Mata was gone to find his next controversy.