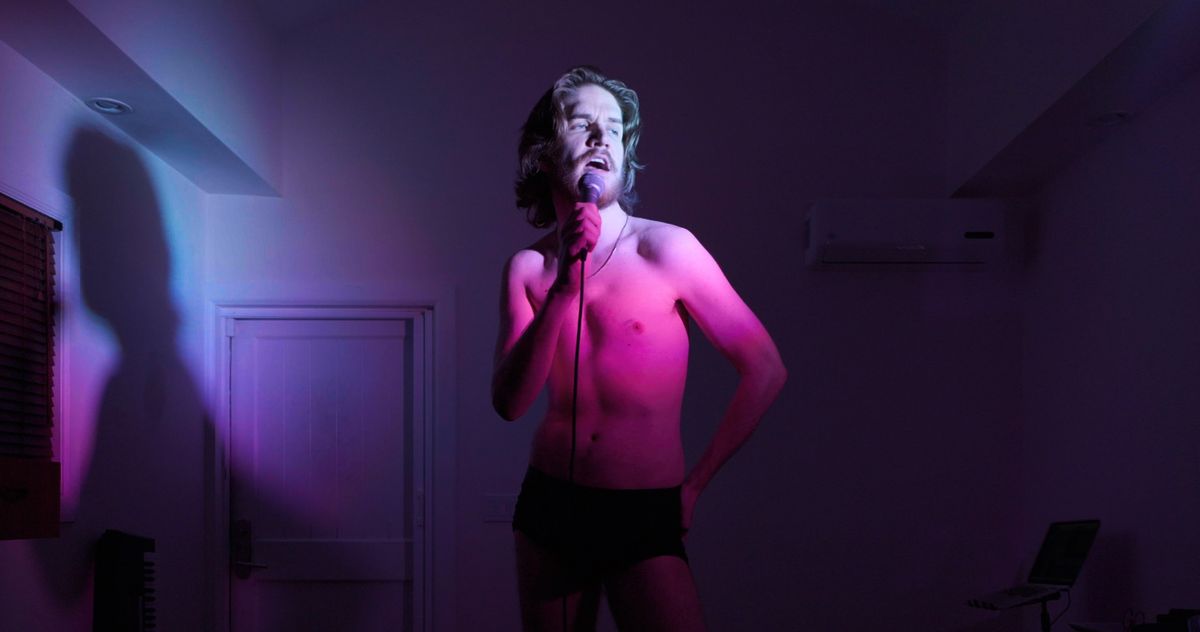 Bo Burnham in Inside.
Photo: courtesy of Netflix

Inside, a new Netflix special written, performed, directed, shot and edited by comedian Bo Burnham, summons and performs in many forms. Like most of Burnham’s comedies, it’s a musical production, full of songs about things like sexting and internet culture and Jeff Bezos. It’s an extremely online-focused cultural critique, often done by recreating specifically digital shapes like an Instagram grid or a Twitch feed. Filmed almost entirely inside a small room, with a plethora of cameras and interesting lighting setups, Inside also plays with the form that launched Burnham’s career. Once again, he’s a vlogger, sitting alone in a quiet room with a closed door, gazing into the black void of a camera lens, taking shots so the result can be edited with meticulous precision. Sometimes he wants to be a concert; sometimes the special turns to the confessional, even journalistic. Shot for several months in 2020, Burnham’s hair and beard grows longer and more shaggy over time, turning Inside in something like a Captain’s Diary, with Burnham on a solo journey through his own pandemic angst.

InsideThe most insistent form, however, is the self-portrait. In many of Burnham’s highly produced pieces, he morphs into characters: a thirst trap, a spooky Baz Luhrmann-style carnival barker, a false– happy singer with a real puppeteer interlocutor. In these moments, Inside is a sort of Cindy Sherman self-portrait, though it’s less about transforming physically and more about projecting her performance energy through a wide range of affects and moods. Burnham is mesmerized, thrilled by the ability to transform through different performance gears. She’s a horny and energetic Instagram vixen; he’s a crying video game character; and he’s also the half-bored gamer who pushes the buttons.

Where Sherman’s work projects her into variations on femininity, many of Burnham’s characters are internet types, and her performances showcase the mannered and dissociative weirdness of life and art that only exists as fodder for online consumption. Sometimes these are mere parodies – Burnham briefly becomes a brand consultant, emphasizing the vital importance of supporting brands in order to support causes. Sometimes they’re weirder and more recursive – at one point a song about gig economics abruptly turns into Burnham making a reaction video that escalates into a wild, dizzying loop. It’s a joke on a very specific online genre, but Burnham’s painstaking direction also makes it a self-portrait of self-loathing, like staring into a gallery of mirrors and being reflected endlessly, giving each other your finger.

Between these performances of high-end characters, InsideThe self-portrait of s sometimes goes into a much older fashion. The special is punctuated by small interstitial scenes, sequences framed to situate Burnham in the cramped space of this tiny room. There’s so much work involved in building the stages and designing each new performance, and in the interstitials, the same little room that was just disguised as a rave or a gym or an arthouse screening space. is now full of natural light, littered with ropes and tripods and trash. We see Burnham surrounded by cameras and lighting gear, often sighing in frustration as he glances at a monitor. He rubs his forehead, pulls out a tape measure to check the distance between his chair and the camera, plays a melody on the keyboard. At times like these, he doesn’t play a YouTube vlogger or a post-modern photographer; he embodies a Renaissance self-portraitist in his studio surrounded by easels and still life objects. In one, with Burnham looking in a mirror as a camera captures his reflection, he does the classic Self-portrait in a convex mirror framing, knowing full well that for the public, he will have the impression of looking at them directly. In the moment, however, he sees only himself.

This absent audience torments Burnham throughout Inside. His last special, Make happy, was released five years ago, and Burnham ends with an extended song about audience expectations, his desire for attention, the way he needs and resents his audience, the panic attacks he would get before performances. His response then was to stop, stop doing live performances, and focus on art forms with less immediate feedback – acting, directing. But with the pandemic stopping, Burnham finds himself stuck with the same creative forms he started with: a room, a keyboard, a camera. And we, maybe, somewhere out there watching him, loving him or hating him, maybe throbbing with excitement, maybe laughing as he mimics the posture of an Instagram model. with an oversized one-shoulder shirt.

He can’t get past the central node of the project, the threatening eye of the audience he desires, hates and can’t see. Sometimes he adds pieces of laughter in the songs. Sometimes the interstitial scenes are a direct address to the audience, and InsideThe opening songs are questions. Should he stop trying to be funny? What good is comedy when the world is falling apart? Should he, a white man, even say anything? If you met someone in a burning house, why would you come up with a joke? However, the questions come pre-packaged with their own answers. It might be a terrible idea, but the fact that we’re watching it means he made it and someone wanted it. “Look, I made you some content,” he sings at the start. “Dad made you your favorite; wide-open.”

Still, he can’t create an audience in front of him, and he’s not even sure he wants to. He only has himself. So Burnham’s self-portrait comes across as the protagonist, the guy whose endlessly growing hair marks the passage of time even as he continues to transform into a dreamy acoustic James Taylor guy, a window cleaner, a puppet. And even as he creates, films and edits all the performances, the interstitials show us Burnham watching them, on tiny phones or laptops. Sometimes he literally projects them on himself, with his white T-shirt as a white screen. These are just endless loops of performance and consumption, caring about performativity, authenticity and productivity, looking at each other in the mirror.

Inside is not transcendent – it simply cannot be. Its author writes himself as a main character stuck in a single room, digging into deeper and deeper anxieties about identity and art. To transcend is to leave, to escape, to go up and out, to be greater than something. Inside is to stay inside and be awed by the depths (of life, of art, of the internet) and not knowing how you can ever leave. It’s an incredible accomplishment, a testament to Burnham’s genius in directing, writing, songwriting and performing. There are also a few overwhelming moments of empathy and warmth. These are moments of grace and openness that are all the more moving as they rub shoulders with scenes like the protagonist of Burnham explaining that he is at the bottom, admitting that he is delaying the end of the special because he does not know what to do. do with itself when it’s done. At times it is Tristram Shandy, in others it is Parks and recreationBen Wyatt holds up a Claymation figure and asks, “Do you think a depressed person could this??But it’s also mesmerizing throughout, catchy and amazing and captivating and egotistical and desperate to think of everyone, all at the same time. “Can I interest you in everything, all the time?” Burnham sings, on the internet but also on this special. The answer is yes.